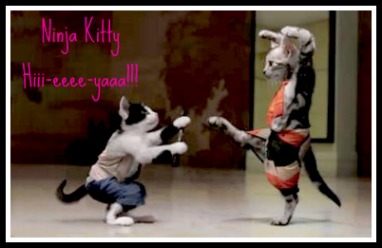 Who needs self defense when all you need is some Ninja kitties. I tried to get a picture of my kitties, Junior and Cleo, but they just would not cooperate.

My point though is you don’t need a Ninja, or to be a Ninja, to protect yourself from bad guys. And that’s what this website is all about. I really was reluctant to put up an ‘About Me’ page for so long because it’s not about me, it’s about YOU…BEING SAFE!


So I am calling this page, ‘My Story’; so you can know who I am and why I built this web site. My name is Julianne and I recently moved to beautiful Colorado Springs from sunny (most of the time) Southern California.

I have been carrying a pepper spray with me for over 10 years (not the same one of course). I was living in the beautiful city of Ventura, California when I got my first pepper spray and it was shortly after that it proved to save my life.


It was a beautiful Saturday on the California coast and I decided to go for a bicycle ride and head south to Oxnard. Poor planning on my part had me leaving much to late in the day for a long ride. This meant I was heading home in the dark.

Now I am not afraid of the dark. Being in the dark does not usually scare me. But on this particular ride there was a very long, lonesome stretch of road along McGrath
State Beach, which is quite lovely during the day, at night in the dark, not so much. It’s just a two-lane road with no lights and practically no traffic and thick with trees and bushes on either side.

My second thought was “he’s passing me? I’m not going that slowly, am I?" And then my next thought was “He’s a little creepy looking” yes even as dark as it was, I had a bad feeling about this guy.


(Side note here. Ladies, always trust your instincts. If something doesn’t feel right, it probably isn’t)


So he rides on and disappears into the dark. But then about 10 minutes later, I hear the same, squeeekkk-squeeeekkk-squeeeekkk, coming up behind me on the right side again and he passes me....again? Huh???

Okay, I’m thinking he must have had to stop and relieve himself in the bushes and I just didn’t see him when I passed, normal enough, right? But never the less, that feeling is starting to sink in that something just isn't right here.

Then another 10 minutes or so, here he comes again, “squeeeekkk, squeeekkk, squeeekk”. Yeah that squeeking noise was getting to me too! I’m thinking all right now, he has passed me 3 times now but I never see him when I would be passing him and I know that it’s dark but I should have been able to see him on the other side of the road, unless……………. he was hiding in the bushes???

After the last pass he seems to be gone for a while, for good I hope, (oh please be gone.) I am starting to feel a little silly being so paranoid and letting my imagination run wild so I start to breath a little easier.


There is a bridge going over the Santa Clara River that I had to cross before getting back to lights, houses, people, civilization, in orderto feel somewhat safe again. I remembered when I had crossed it earlier it hadn’t been maintained, lot’s of bushes slapping me in the face as I rode across. So I get off my bike to walk across this time
and as I get a little closer I can just barely see something right at the bridge and I suddenly realize it is the end of a burning cigarette.

There he is! Just standing there, waiting for me! I can’t see him but I know it’s him and when I get to that spot he’s going to grab me and drag me down to the river and when he’s through with me they will probably never find my body.


Now all this time that I was feeling the terror mounting in me I had completely forgotten I had my pepper spray in my backpack. Having just recently purchased it, on a whim really, I just stuck it in there without much thought. So I pulled out my pepper spray and held it straight out in front of me pointing towards him while I looked straight ahead. I didn’t want to look him in the eye as I passed, he would have seen the fear in my face.


Now here is the best part of my story. As soon as he saw my pepper spray, he jumped on his bike and took off like a rocket. A squeeky rocket, yes, but a squeeky rocket that was going away from me. I ran across that bridge, got back into town and headed for the nearest bar for a couple of very strong cocktails (I don’t drink any more but I sure as heck was glad I did then).


I realized how close I came to being a statistic of a missing person, body never found. I’m sure once he was done with me all of the critters would have finished me off. And I never even had to actually use it, I just flashed it, and that was enough. The really great part was once my heart finally started beating normally again and my nerves calmed down I realized how empowered I felt. I knew that never again was I going feel helpless because I would always have my pepper spray, or something like it, with me at all times and wherever I go.


In fact, in all the years that I have carried pepper spray, I have never actually sprayed anyone. But it is always with me, out and visible. You will never find me with my pepper spray buried in the bottom of my purse. I want to make sure that if there is a predator out there, sizing me up, looking for his next victim, as soon as he sees that I am armed and dangerous, he has just scratched me off the list of possibilities. So I am sure that my pepper spray has done the job on several occasions, without me even knowing it.


Over the years, every time I hear a story on the news about some poor girl being attacked or killed by some evil wicked weirdo, I always feel regret as well as anger, thinking if only…………. If only she had a pepper spray, mace spray, stun gun, taser, something, anything.


Nearly every day there are stories in the news about someone being the victim of a senseless act of violence. If you live anywhere in California you may recall the story in March 2010 about the beautiful and accomplished 17-year-old named Chelsea King. She went jogging on the trails above Rancho Bernardo Community Park and was killed by a 31-year-old convicted sex offender named John Albert Gardner III. He also confessed to the killing of Amber DuBois, age 14, a year earlier.

Or the story of poor Bryan Stow who in April 2011 was beaten into a coma by a gang thug while leaving a Dodgers / Giants baseball game. Apparently the thug did not like the fact that Bryan was wearing his Giants shirt. It has been over 1 year and Bryan was just recently able to be moved back up to Northern California where he lives. Which is really quite wonderful since the doctors had nearly pronounced him dead. The fact that he even regained consciousness is a true miracle. He is alive but will never be the man that he once was. Bryan was a big strong paramedic who was just a victim of a surprise attack. So even guys need to carry something. Even though my website is titled Women’s Self Defense, these products will do just as good a job saving the lives of guys as well as gals. Your pepper spray doesn’t have to be pink; I do have some tough looking black ones too!