powerful punch for such an itty bitty

thing. But make no mistake,

this baby will take 'em down.

The Key Chain Pepper Spray has been

a very popular non-lethal means of

self-defense for quite some time. So

the folks at Streetwise thought, why

not a Stun Gun for your Key Chain.

was born. And the folks at Streetwise

are very responsive and listen to their

customers. As a result they made

quite a few improvements.

It's not much bigger than a

Pepper Spray but has all the power

of a much larger Stun Gun.

When you fire your SMACK

into the air, you'll be able to tell

immediately the power it packs

It attaches to your keys so you'll

always have your stun gun at the

ready, especially while walking to

It's so small, it will fit right in the

palm of your hand so it's easy to

It has the built-in charger which you

just slide out and plug into an outlet

when it needs charging. No hunting

for the cord or rushing to the store for 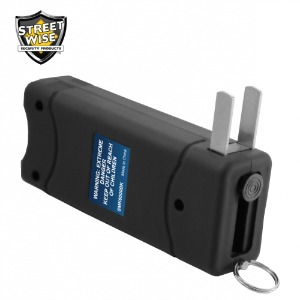 And the folks at Streetwise

listen to their customers

who wanted a brighter flashlight

and a better holster.

Just check out the picture below of

the Old light as compared

with the New light. 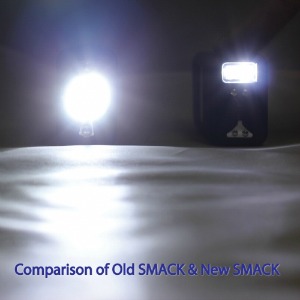 I know, it sort of looks like two Moons

rising over the ocean. But when you

compare the two, you can really tell

what an improvement the new

flashlight (on the left) is. 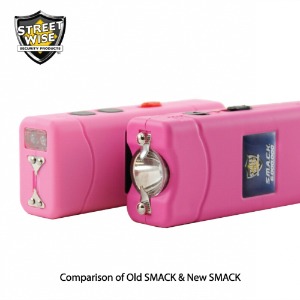 In the above picture you can get a

better visual of the improved

flashlight as well as the probes.

In this one, the older style is on the

left and the new and improved is on

holster that comes with a metal ring

as well as a belt clip so you have

options. You can put it on your purse,

put it on your keys or

put it on your belt.

Whatever works for you.

Of course you will have a

so just try not to drive over it with

and 18 wheeler 'cause those tire

tracks will give it away.

Half the size of most Stun Guns but more power than most models. Give it a test fire into the air. POW!!!

Attaches to your keys so when you are most vulnerable walking to your car you won't be fumbling around looking for your Sun Gun.

Easy to conceal because it's so small it will fit right in the palm of your hand.

A Built-In Charger so there's no hunting for your cord or buying batteries.

A Bright LED Flashlight, new and improved so there's no need to carry an additional Flashlight.

Lifetime Warranty and Made of the highest quality components.

But when you think about it,

if it's saving your life,

who gives a hoot what color it is.

It will be the best