This new TRIGGER Stun Gun from

has some great new features.

there is some serious stopping power

with this baby. And remember, your stun gun

is great at discouraging not just

Your stun gun will be just as effective

(and maybe more so) than Dog Repellent

Animal attacks may not be an issue for you

if you are living in Los Angeles

(well, I imagine you do have dog's running lose

there as well) but hiking here in Colorado,

running into an animal is more common,

and not just cute little squirrels.

The TRIGGER has a flashlight

that is 100 lumens, so the light alone can

sometimes prevent a nasty situation by

simply blinding your attacker. Of course,

it can be used as an every day flashlight as

well. And this cool new design has a unique

trigger (hence the name) which runs along the

side of your 'Trigger' for ease of operation.

The built-in charger means that you never

have to keep track of a charging cord and

the disabling pin stop-strap is that added

feature that means if your stun gun is taken

from you, it will no longer be a stun gun,

just a flashlight, so it can't be used against

you. You get the same great features as the

RUNT Stun Gun, but with just a little more.

Your 'Trigger' Stun Gun when used as a self

defense weapon will work through about ¼

inch thickness of clothing, so you don't need to

be on bare skin. The neck is good, the torso,

also good, and my personal favorite is the thigh

muscle. This is a big muscle so they will go

down faster. Remember, the energy from the

Stun Gun dumped into the body works on the

muscles, so the more muscles, the faster they

go down. If it is winter and you're in a cold

climate, the torso is likely to be covered in way

sweater, long-johns, but the thigh likely has

just jeans and maybe long-johns. But get 'em

where you can get 'em.

Now as an animal repellent, the animal is

reacting to more than just the sound. When

you point your Stun Gun at an animal and fire

it into the air, there is an electrical charge

that is going through the air that an animal

can feel. So it's not just that scary sound,

they can feel your stun gun. 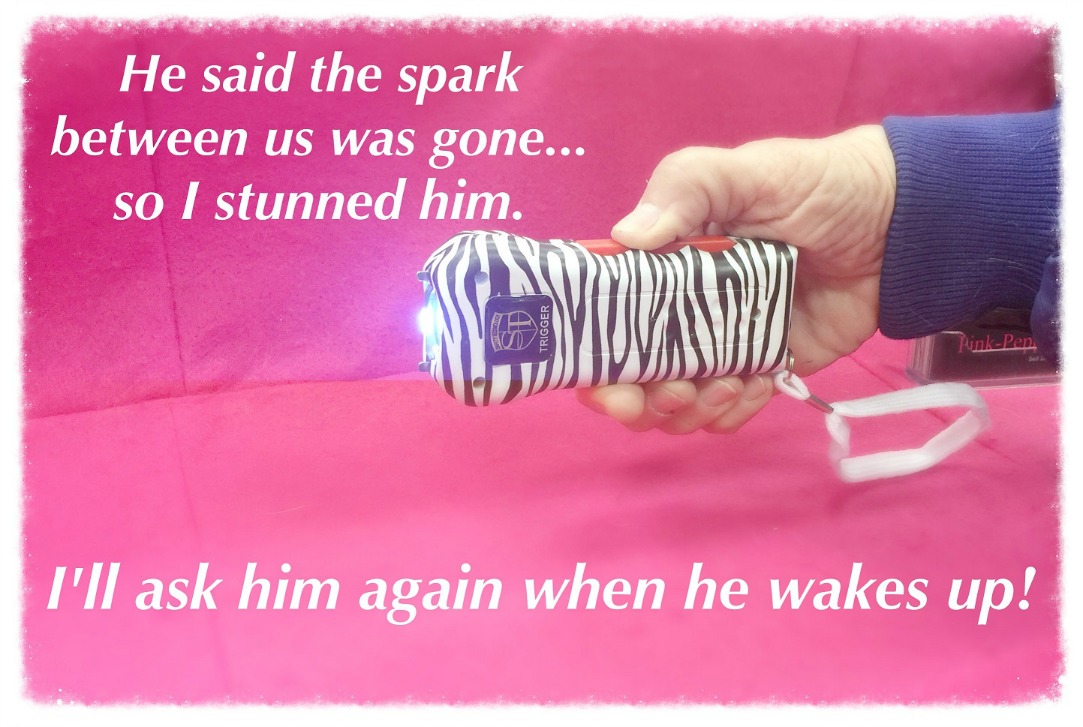 And remember, when you fire off your stun

gun into the air, just 1 second at a time.

When you are holding it on a person, you hold

that stun gun on them until they go down,

however long that takes; i.e. just a couple of 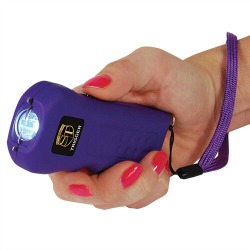 Interesting side note, when you are actually

stunning a person, you do not hear that scary

sound or see that arc because it is now going

through that body. It is only when you fire it

into the air that it makes that fabulously scary

and it is available in 8 colors

Your 'Trigger' should hold a charge for about

3 months, but I recommend instead you

charge it for just a couple of hours once a

month, say, while your eating dinner.

And remember, your 'Trigger' comes with the